Inside the Hungarian Parliament Building

Sometimes when I step on the places where big politicians go, I feel that red carpets are giving me a feeling of power. It is not the fault of the politicians who conquer a country, it is the feelings that the palace creates for them.
I don’t mean the politicians of Hungary, because I don’t know them well, but I’m not so sure if the Hungarians would love them. 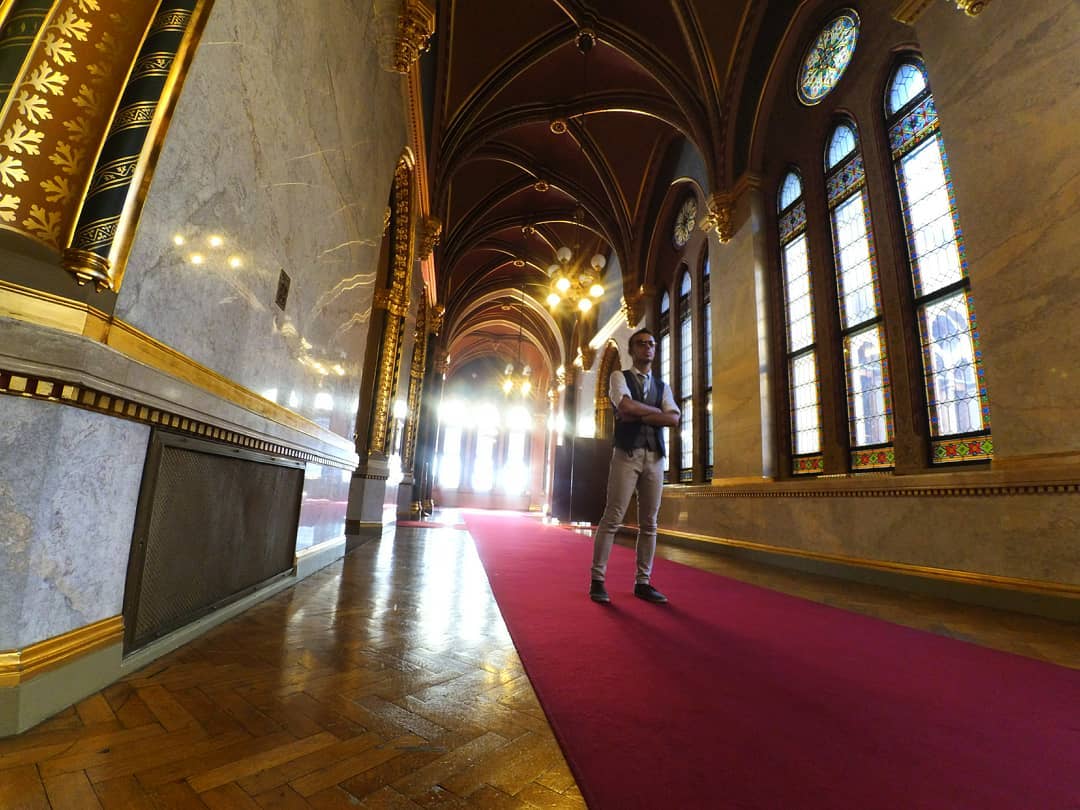 Who are they who are destroying the world? Those who are well-dressed and very stylish are filthy internationally. Who are they who swear to accept the responsibility of people’s lives and suddenly hide behind the holy books? Who are they who do not even want to hear the voices of the people?
They have built big and thick walls! Walls that do not let people go inside, the walls that give them power. Carpets and jewelry on the walls that keep them always satisfied.

As Noam Chomsky said:
“It’s no longer time to know who created the world. We have to see who is going to ruin it!”

Until now, I was not in their place. I was never a politician, but I’m sure if I was a politician, I was tired in less than a year, I felt I had to go, I had to get on the road. Not just because I’m a travel addicted, but I need to move like a bird.

Inside the Hungarian Parliament Building:

The Parliament Building is in the Gothic Revival style; it has a symmetrical façade and a central dome. The dome is Renaissance Revival architecture. Also from inside the parliament is symmetrical and thus has two absolutely identical parliament halls out of which one is used for the politics, the other one is used for guided tours. It is 268 m (879 ft) long and 123 m (404 ft) wide. Its interior includes 10 courtyards, 13 passenger and freight elevators, 27 gates, 29 staircases and 691 rooms (including more than 200 offices). With its height of 96 m (315 ft), it is one of the two tallest buildings in Budapest, along with Saint Stephen’s Basilica. The number 96 refers to the nation’s millennium, 1896, and the conquest of the later Kingdom of Hungary in 896.

The main façade overlooks the River Danube, but the official main entrance is from the square on the east side of the building. Inside and outside, there are altogether 242 sculptures on the walls.

The façade displays statues of Hungarian rulers, Transylvanian leaders and famous military figures. The coats of arms of kings and dukes are depicted over the windows. The east stairs is flanked by two lions.

When entering the Parliament, visitors can walk up great ornamental stairs, see frescoes on the ceiling and pass by the bust of the creator, Imre Steindl, in a wall niche. Other statues include those of Árpád, Stephen I and John Hunyadi.

One of the famous parts of the building is the hexadecagonal (sixteen-sided) central hall, with huge chambers adjoining it: the Lower House and the Upper House. The modern National Assembly is unicameral and meets in the Lower House, while the Upper House is used as a conference and meeting room. The Holy Crown of Hungary, which is also depicted in the coat of arms of Hungary, has been displayed in the central hall since 2000.

Further features include the stained glass and glass mosaics by Miksa Róth.

Due to its extensive surface and its detailed handiwork, the building is almost always under renovation.