This was the first time I was traveling with an Iranian tour. As I wrote before, I travel mostly for anthropology and history, so I do not want to call my posts as travelogues, but I have to. I would could call it something like: "anthropology around the world" or "the story of the world and humans".

However, lovely Iranian people played and talked in the morning until the night, the happiness of the people would make me happy and, in my opinion, if there was a list of "Breaking ice between humans' rank", the Iranians would be on top of the list. They love each other and share everything with each other, and this is something that you will not find anywhere in the world. The apparent behaviors of humans can be categorized, but in Iran there are things that are just specially for them, when you're with them you feel that they know you already for some years. It has always been something interesting for me that there are so many roots among the Iranians, the Ottomans, the Persians, the Arabs ... and when they are together, everyone is alike, that's why Iranians are well known as the most friendly people among the Europeans and Asians.

Tabas is a city in and capital of Tabas County, in South Khorasan Province, Iran. At the 2011 census, its population was 35,150, in 9,903 families. It is a desert city with lots of date and citrus trees. It has a 300-year-old public garden, (Baghe-golshan). There is also a shrine in Tabas that is visited every year by thousands of pilgrims. Tabas has two universities, with 2500 to 3500 students. The city has hot summers and people rarely see a winter snowfall. The history of Tabas dates back to pre-Islamic times. It was an important outpost of the Sassanid empire and during the Arab invasion it was considered the gateway to Khorasan. It was spared when the Mongols attacked Iran. It had a local government incorporating not only Tabas, but also Ferdows and Gonabad.

I had always wanted to see Tabas, because I had previously read in a book that the stepfather Cyrus the Great was from Tabas, and Cyrus the Great had grown up there till he was 16 years old.

Herodotus, the Greek historian, said that Cyrus the Great had lived in Tabas until his 16.

In my opinion, the beginning of the loss of the Persian lands was not just from the Sassanid era, and this was started at least in the "Seleucid period".

Throughout history, the Persians have always been fighting to save Pars lands, the resources that the whole world always wanted to sum up at the beginning of history in Pars. At first there was a war on money, and now on oil and power.

In the period of the Parthians, they created military garrisons in all Persian lands, and one of those military barracks was Tabas in the western borders of the country.

In the Sassanid era, Tabas was like the Achaemenid period. Yazdegerd III, the last Sassanian emperor, settled in Tabas for several months before going to Merv. Throughout this time, Tabas was as a bridge to the east of the northeast with the west, an important and strategic route for the Parthians, the Hegmataneh, the Shusha and Mesopotamia to the Pasargadae. railroaders were built on ropes and so many Chapar Khaneh were created on the way. (Wikipedia)

As you know, Muslims and Arabs always seek to occupy the territories of Persia, this is very characteristic during history.

Kal (valley) Sardar This valley takes about 40 minutes to walk without stopping (including the return journey). From the beginning to the end, sands and the rocks could be seen, most of them were covered by algae, one interesting thing to me was that sometimes some parts of desert could be seen.

The shallow creek of cold water from amongst the two long sandy walls that occasionally felt that there are hot water points due to the presence of Morteza Ali's spa bath in the middle of the valley.

After about 10 minutes walking, Abbasi's historic dam dating back to 700 years ago could be seen. Its location and its brick texture, which is used in the crown of that stone, is amazing!

In some of the walls you can see the 1500 years old "Gabri places" (Sassanid period), which I will write about further on.

The leader had said that when you see Shah Abbasi Dam, come back. But I went ahead to see the natural and beautiful landscape after that dam, and of course, no one was there. It was like pristine nature.

The wars that have always been fought for Persians' resources finally led to the defeat of the Persians during the Sassanian era, but the efforts of the Emperors of Pars are still admirable, even though the territories of the Pars have been occupied and our emperors have been lost.

However, in Tabas, the Persian defense and the safe keeping of the enemies and Arabs were well visible.

When the Muslim Arabs entered the castle of Charda in the 29th of AH, the Persian people of Tabas, who demanded peace from the Muslims, and Muslims who never accepted peace in history got taxes from the people of Tabas (tax of peace). This story was a joy to Omar, the second caliph, which made Tabah as the gateway to Khorasan. After the Shiite Imam "Ali" got the caliph, the people of Tabas became Muslim, and he cut off the tax (tax of peace). And when the Umayyads came to power, taxes and peoples' tensions began to rise, because there were a lot of costs to cross the Tabas gate and desert to move the Arab army. It is very painful that Parsian people of Tabas had pay the cost of transporting the Arab army to live in peace, which is the general ideology of the Arab rulers, which can be felt today as well, right?

However, as I wrote earlier, the Sassanid era was the era when Gabri houses dating back to 1500 ago were being built.

Gabri houses are more visible in the "Jenni Kal", due to erosion and their numerous flood altitudes, today they are much higher than their height in Sassanian era.

When I first  heard the name of "Kal Jenni", I knew that there must be a certain story behind this name, but after asking the tour leader and searching in the internet (which I had to search later, due to the lack of network in the area), I noticed that the villagers from Azmighan and other villagers around the valley, after seeing the flow of water and the floods, which looks very horrible, used to believe that Jinnsare was living in this silent and beautiful valley. Of course, this was due to lack of sufficient knowledge of geological sciences at that time (in my opinion), because it is clear from the appearance of the walls of this valley that over time the valley was created due to erosion, even trees and sometimes plants indicate that the valley's water elevation was much higher than today.

I already read in a historical book that thousands of years ago the continents were connected to each other and separated little by little, so this natural erosion and the separation of tissues are not so far from the mind, this valley is a bit like the Grand Canyon in the United States, which some say is created for that reason.

More interestingly, is the presence of water in the heart of this desert texture, the tumultuous waters that can be seen in the valley.

The presence of these waters and small waterfalls for me, who is so curious about history, made me investigate the matter as soon as I had the Internet. Geologists, by studying the region, wrote that these waters were built by human hands and architecture during the Sassanian era, as they changed the path of this valley, which became natural in 1500 years after the Sassanian.

And here again we return to anthropology, which human beings used from nature at the very beginning, how to preserve the water and natural resources, and because of the shadows in this valley, this water drips and dries, so you can use it. And also after the Sassanid Empire, nobody wanted to ruin it (so far).

This mysterious valley is the best place to evoke historical curiosities, especially for someone like me who thinks very much about the Sasanian era. I always wondered how weak the Sassanian emperors were, that finally defeated by the Arabs, which I was saddened by. But sometimes in the far nature of the lands of Pars, we see things that proves the opposite, and shows the stamina and Sassanian efforts to preserve the land. One of those signs is the "Gabri Houses", which was the most mysterious part of the trip.

The houses of Gabr are the houses where the Sasanians sheltered from the enemy, the construction of these houses in the mountains without modern facilities is not strange after seeing Persepolis and Pasargadae, and shows that nothing was impossible for Iranian men and women throughout history. 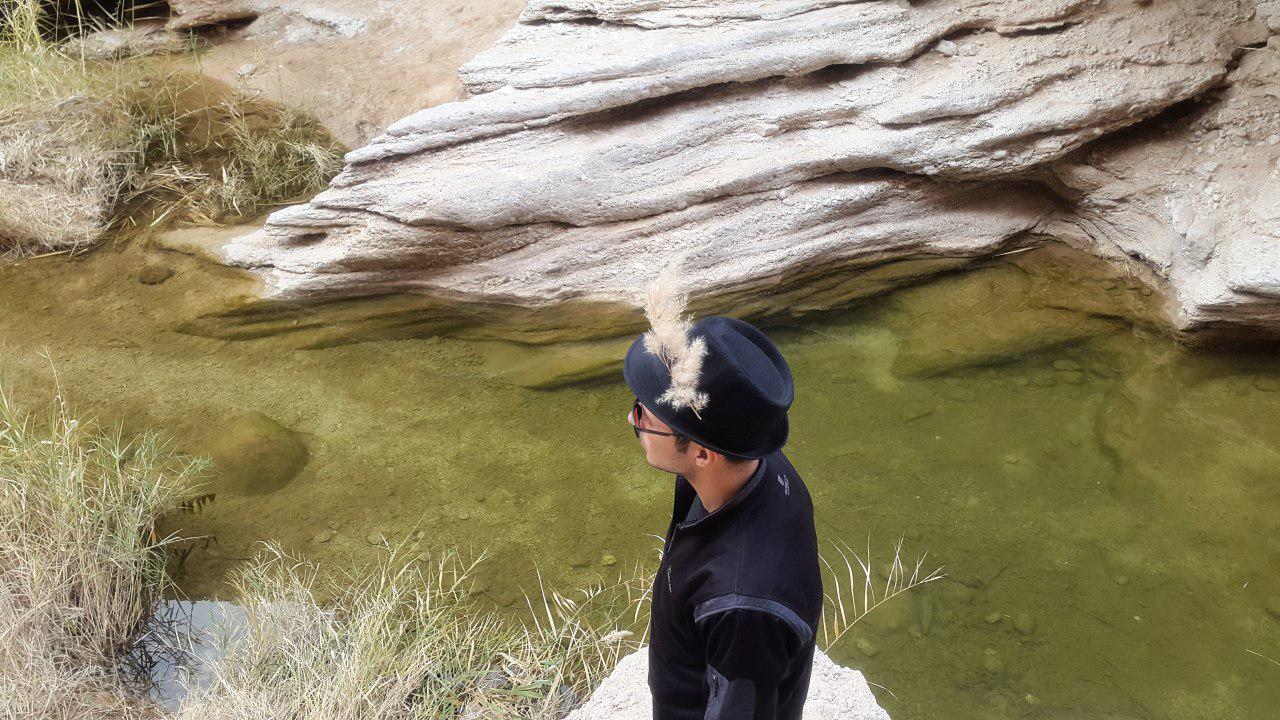 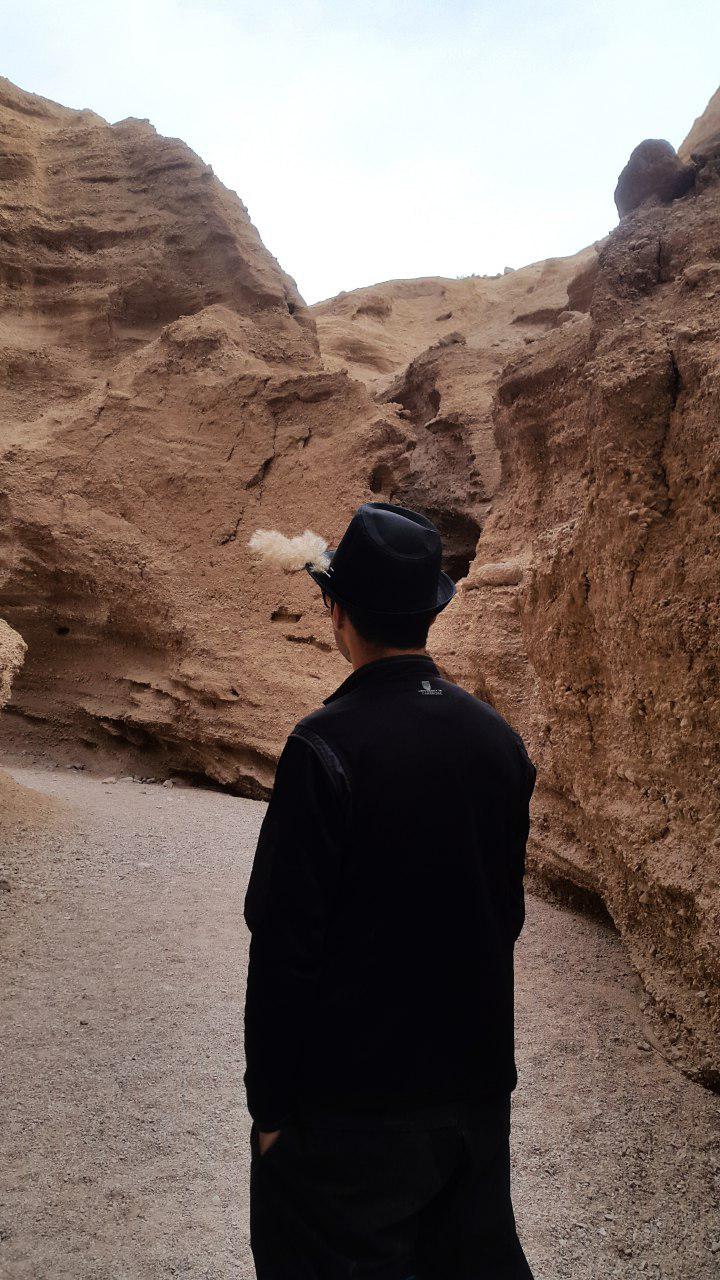 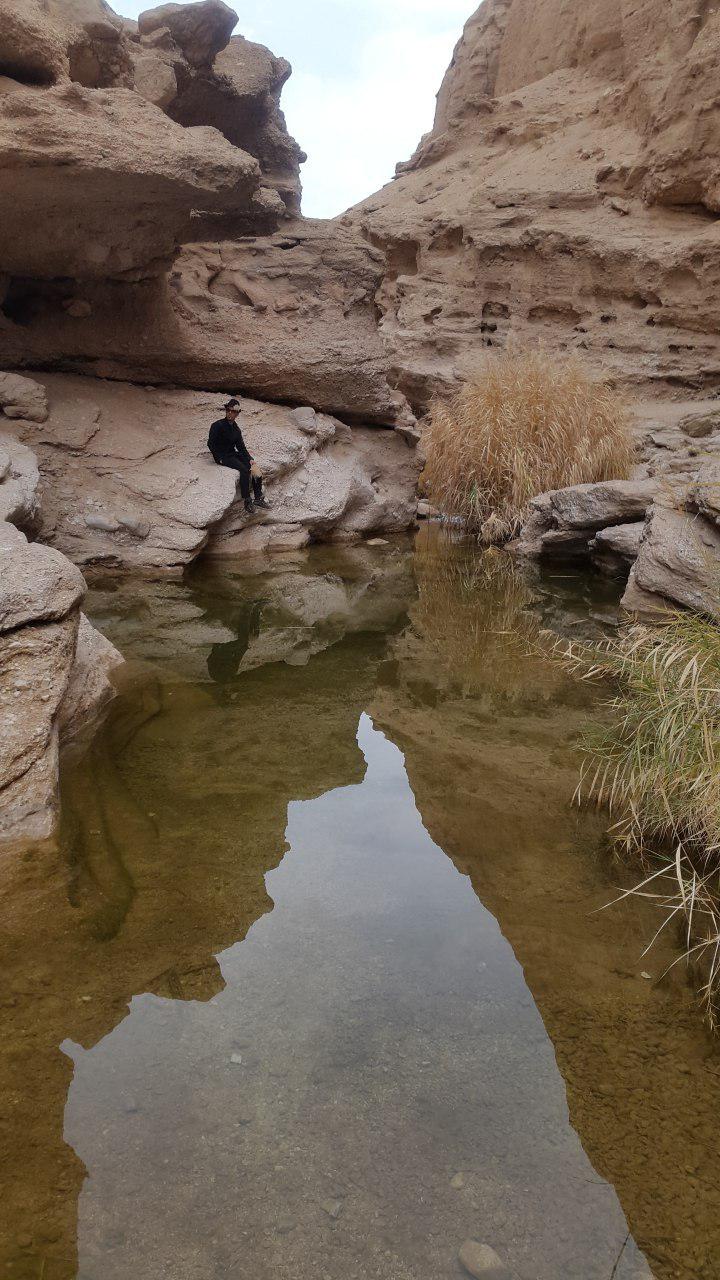 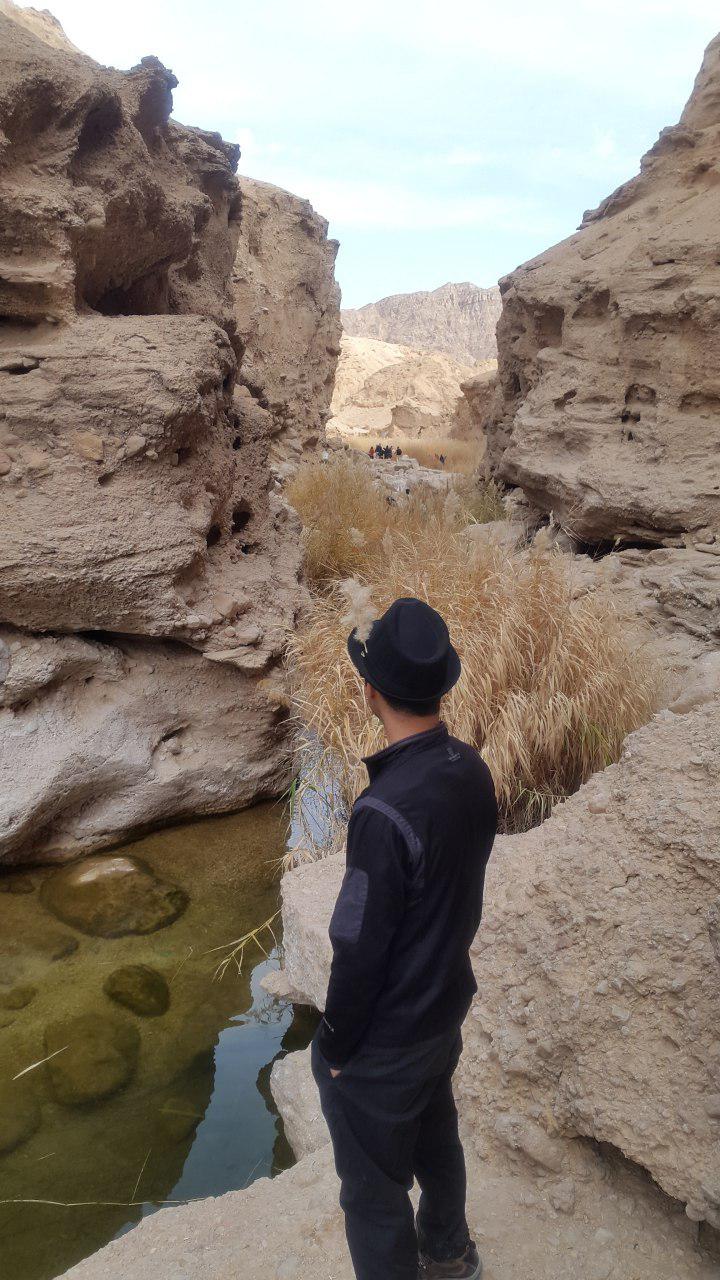 Behind the Azmighan village which is a very religious and Muslim village (very weird), was full of rice paddies under palm trees that created a professional paradox of nature.

In the whole texture of Tabas and around it is very strange, in the first step you see the sand of the desert, next to it you can see a rice paddy, and you can find palm trees above your head. And in the second step are the raging rivers and hot springs, and in the heart of the mountains you can see the harbors of the Persian Sasanian Empire.

Tabas tour leader said the rice and dates of this area are of the best quality, although I didn't test it, but it could be believed due to the area's weather.

This miracle was the result of the collaboration of natural elements that made this desert village one of the most popular tourist attractions in Persia.

The river, which flows along the village behind the rice paddies, leads to a spring called the "Takht-e Aroos".

Next to the rice paddies, there are mountains where the Gabri houses are visible. 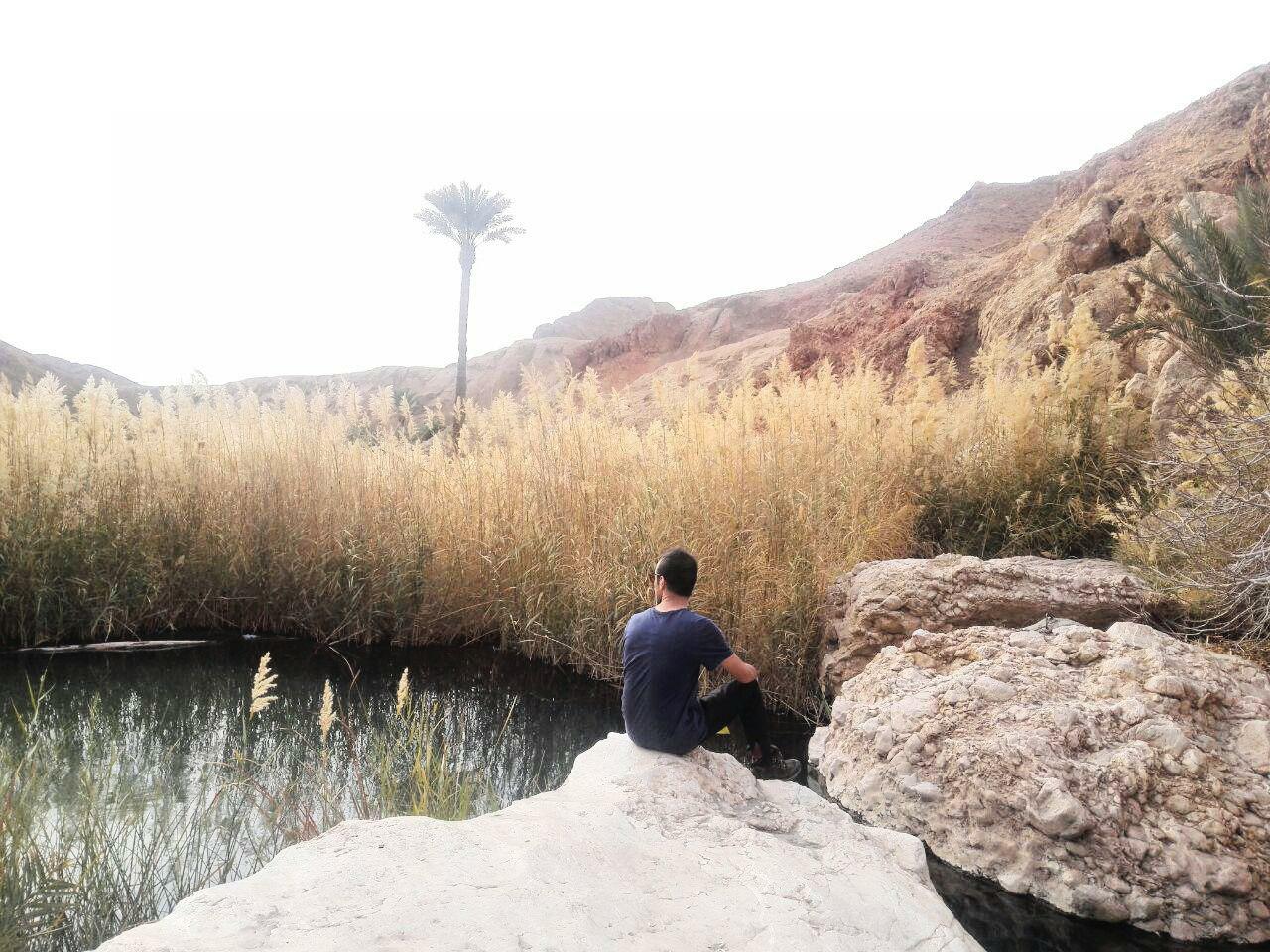 Deserts are places where human beings end up in absurdity, when it's no longer important whom you were and who you are. Desert's silence whispers the real world, desert says that from dream to reality everything is null. There is no love and life just spins on the line of emotion. Desert is bare nature, and as a human being was born the same way, this adaptation touched my feelings in the short time we were there.

I always wondered what we are living for, like the aquarium fish that will die, like desert camels that would one day be destroyed.

I thought that the world, no matter how many ups and downs it has, but it's ultimately the same as the original form of life and death for all. Not only for humans, but for every other living creature.

The sunset has always risen, and these are human beings and other creatures, each evening, may be the end of something for them.

When I was in those thoughts, I found a camel bone, which is my only souvenir from Tabas. 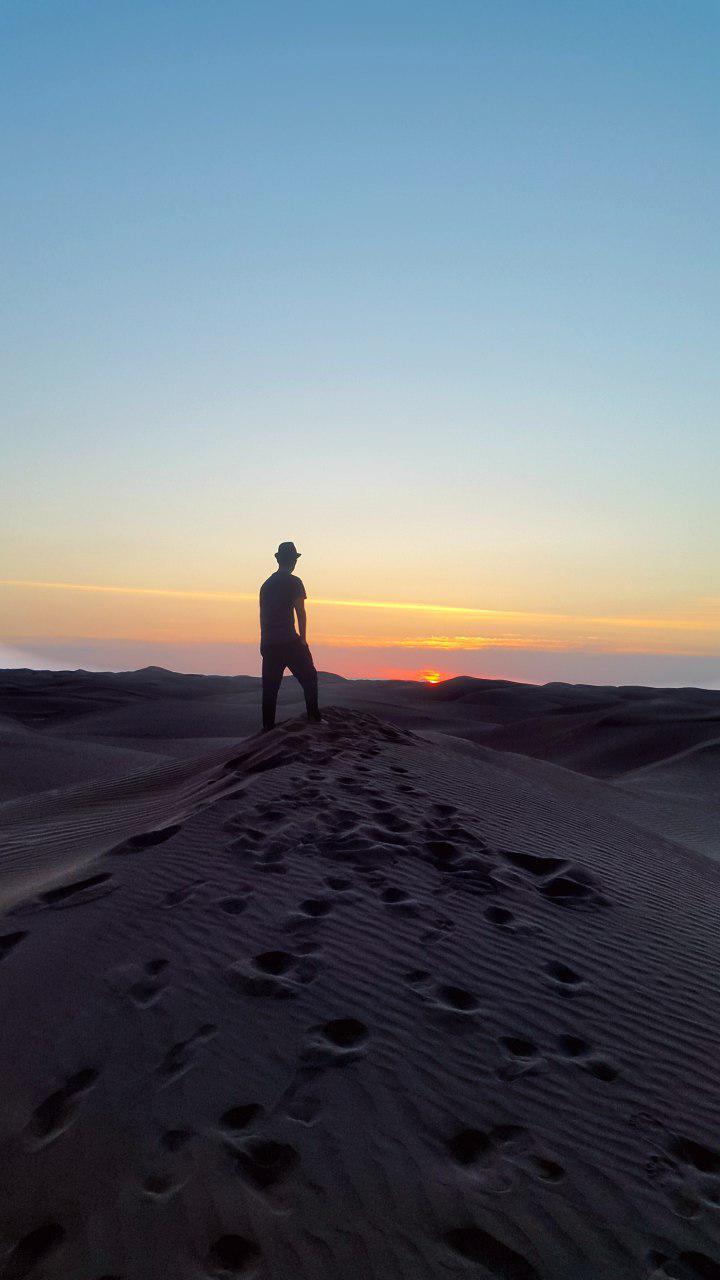 The desert is lonely like any human, but the man sometimes see the sunset, sometimes the sunset means it's about to end, and on the contrary, the desert is always dawning.